In Hordes: High Command, each player takes control of one faction of the Hordes world – Skorn, Circle of Orboros, Trollblods or Legion of Eveblight

Game description from the publisher:

Brutal conflict spreads across the wilds of western Immoren, fought by savage warriors and terrible beasts. Powerful warlords orchestrate grand strategies and daring battlefield tactics, their actions bringing glorious victory — or the despair of final defeat. Do you have the courage and cunning to guide your forces to ultimate triumph? Take command of the mightiest warriors and beasts to conquer the wilds of Immoren!

In Hordes: High Command, each player takes control of one faction of the Hordes world – Skorn, Circle of Orboros, Trollblods or Legion of Eveblight – leading whole armies of soldiers, Warlocks and mighty Warbeasts to great battles which will shake all of Immoren and change it forever. Each faction has individual decks with faction-specific warbeasts, units, and resources which assure different strategy and gameplay from the other factions. Additionally, before each game, players choose three of the five warlocks specific to their faction. This decision makes every game different and allows for multiple strategies. During the game, players play a whole season of War, trying to build up their strength, then capture strategic locations to earn victory points. 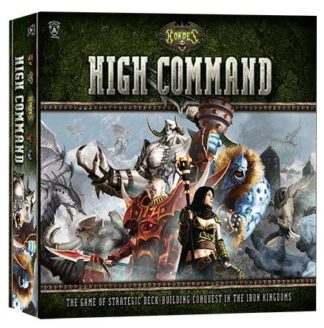