Produced by MandalMotors and flown by enforcers of the Hutt kajidics and other criminal cartels, the M12-L Kimogila fighter was dreaded by spacers across the Outer Rim for its ordnance capacity and the withering torrents of coordinated fire it could unleash. The M12-L Kimogila Expansion Pack brings this heavy fighter to life in X-Wing™ as a blunt instrument that trades maneuverability for raw destructive power. Its pre-painted miniature starfighter comes with four ship upgrades and ten upgrades, many of which reward you for catching your foes in the ship’s new bullseye firing arc. 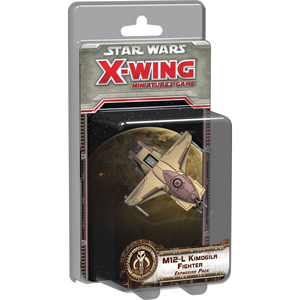