It was the critical moment in the heist of a lifetime when you found out the gang was compromised. Now it’s undercover cops and hardened criminals in a desperate shootout . . . and no one knows who’s who.

Never Bring a Knife is a light, quick social deduction card game with less talking and more shooting. It’s got fast-paced action inspired by modern action movies, and a new mechanical approach that’s a breath of fresh air in the social deduction genre.

When the first player falls, everyone who had the same role — Cops or Criminals — loses. The whole other team wins.

Find your friends, keep your head down, and don’t tip your hand!

Each player starts the game knowing their own role, and the role of the player to their left. Then, in each round of play, every player plays and receives four cards like Gun, Armor, Money, Crime, and Intel. Some are played face-up and some face-down, according to three simple rules. Then, all cards are revealed and everyone learns who was shot, who was wounded, who banked money, and who learned what. Finally, players can spend money to treat wounds or learn even more about the other players’ roles before the next round begins. When someone has taken three wounds, they fall, their whole team loses, and the other team wins. 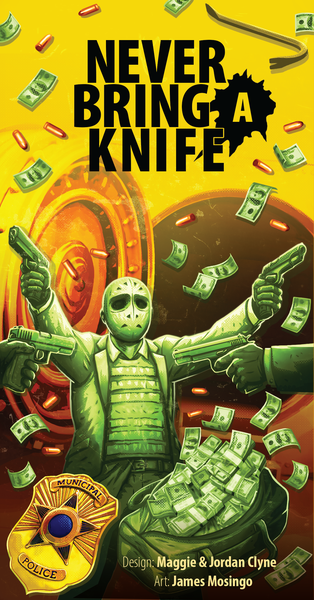