Munchkin sees three to six players competing to grab the most loot and defeat the most monsters. Throughout the game, players take turns to ‘kick down the door’ in order to challenge various creatures to battle. Should a player successfully subdue a monster then they gain a level and a collection of loot – which could contain weapons, equipment and spells.

As players gain more levels and loot, they will have to face stronger and stronger monsters – until even their opponents are working directly against them by casting a wide variety of meddling spells. Eventually, players must defeat one last monster in order to reach level 10 and win the game, but they’ll inevitably have to face the slings and arrows of their fellow competitors as well.

Munchkin is back in a whole new addition! Munchkins & Mazes is the most elf-referential Munchkin game yet, with cards inspired by the most popular roleplaying game ever, the latest live streaming crazes, the gaming hobby in general, and even by Munchkin itself! We’ve updated some of our favorite cards and created a whole lot of new ones in this set that’s sure to please anyone who’s ever rolled a 20-sided die. 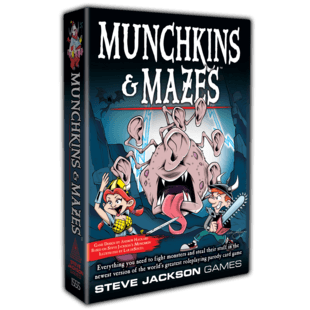