In the year 2288, off-world mining is now controlled by a few mega-corporations. It is no longer just people or nations that are subject to exploitation, but entire planets and moons. As the CEO of one of these mega-corporations, in Charon, Inc. you will vie against CEOs of other corporations as you exploit the planet’s resources and colonize Charon, the largest moon of the dwarf planet Pluto.

You will stake claims to the various mining regions of Charon, acquire resources for building facilities, use special actions (fair and unfair) to gain advantages over other CEOs, and build your empire to achieve victory in this fast-paced game of planetary domination! 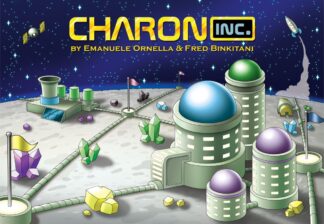